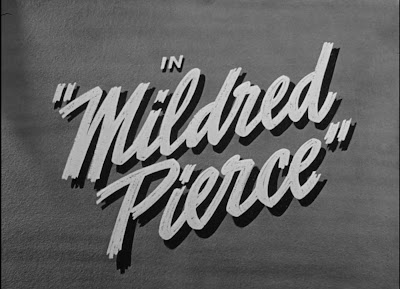 Spoiler Alert: Crucial plot points are revealed in the interest of critical analysis and discussion
For me, Mildred Pierce has always been the most watchable and quotable of Joan Crawford’s movies. Which is really saying something with gold-plated doozies like Strait-Jacket, Torch Song, Berserk!, Queen Bee, and Flamingo Road staring me in the face.
This film that won Crawford her first Oscar nomination and only win (she would be nominated two more times) ranks so high on my list of favorite movies that, by rights, I should have written about it long before now. But like many classic-era films that also enjoy broad popularity, Mildred Pierce is a movie that's been talked about, written about, analyzed, remade, lampooned, and borrowed from for so long, it simply felt as though I had nothing new to add to the conversation.
That's probably still the case. But the occasion of having recently read, back-to-back, the 1941 James M. Cain novel (upon which the film is based) and a terrific 1980 scholarly volume by film historian Albert J. LaValley devoted to the academic discussion of Mildred Pierce (!) complete with the published screenplay – left me with so much Mildred on my mind, the time felt right to commit my personal thoughts on this long-beloved film, to this, my internet film diary.
The romanticized Stella Dallas myth—embracing the nobility of maternal love that sacrifices everything to secure the financial and social success of one’s child—gets a severe upending in Mildred Pierce. This surprisingly still-potent melodrama casts Crawford as a working-class divorcee and mother of two (the titular Mildred) whose obsessive/neurotic love for her serpent-toothed eldest, Veda (Blyth), provides the grist that fuels a determined ambition to build a sweeping financial empire on fluffy pie crusts. The drama of this tale is that the same mother-daughter bond…whose dynamics are entrenched in emotional and psychological dysfunction (with a scoop of the Electra complex on top)… figures just as significantly in bringing about Mildred’s personal and professional ruin.
Ms. McQueen made her uncredited film debut in 1939 appearing alongside Joan Crawford in George Cukor's The Women. By 1945 she'd appeared in such high-profile films as Gone with the Wind, Cabin in the Sky, and Since You Went Away. Yet despite the size and memorability of her role in Mildred Pierce,  her name doesn't appear in the credits.
For all the talk of this being the film to reverse Crawford’s fortunes, helping to erase the stigma of boxoffice poison that dogged her following her so-called amicable ouster from MGM; Mildred Pierce, oddly, represents less a departure from type than some of her other roles. Indeed, in many ways, Mildred Pierce serves up an à la carte menu of everything that first comes to mind when I think about Joan Crawford’s screen persona.
If I’m guilty of harboring a mental image of The Crawford Mystique as: the inevitable ankle strap shoes, always brandishing a gun, invariably slapping somebody, suffering nobly in shoulder-padded mink, photographed through impossible shadow formations highlighting her eyes, and playing characters disposed of a steely self-determinism…then, Mildred Pierce does not disappoint. It's all here.
As movie characters go, the been-around-the-block maturity of “common frump” Mildred Pierce-Beragon is ideally-suited to both the gifts and limitations of then-38-year-old Crawford. Playing what is essentially just a more lived-in variation of her usual stock-in-trade: “…the shop girl who fought her way to the top, made a great success” (God help me, I’m quoting Mommie Dearest). An image established as early as 1930's Our Blushing Brides--one of Crawford's earliest post-silent era features--Mildred Pierce is a challenging role that nevertheless remains comfortably within Crawford’s tried-and-true wheelhouse. And to give credit where credit is due, Crawford, clearly recognizing the sharp script, showcase role, and atypically noirish milieu of Mildred Pierce for the rare opportunity it is, gives her performance everything she’s got. 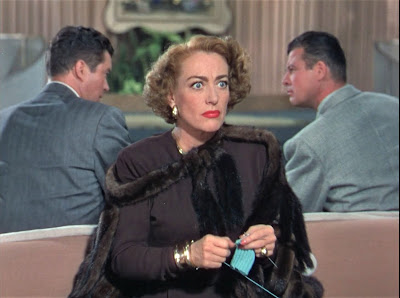 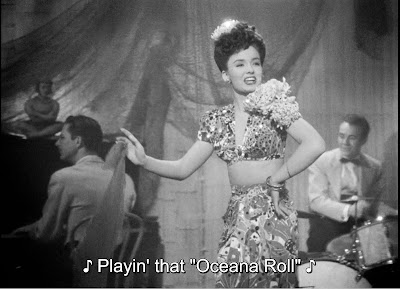 Veda's brief and ignominious stint as an entertainer is a personal high point of Mildred Pierce. Especially for my partner, who unfailingly breaks into peals of laughter at Veda's a-moving-target's-hard-to-hit choreography and scarf-flailing, bow-out exit.
THE STUFF OF FANTASY
From writing this blog I've learned that many families and couples have favorite movies that become in-house quotable staples over time. A phenomenon wherein repeated lines of dialogue or references to certain scenes have morphed into shared running gags.
In the 27 years my partner and I have been together, there are still only a handful of movies that have risen to those hallowed ranks. Andy Warhol's BAD is one of them ("O'Reilly O'Crapface."), All About Eve is another (Birdie - describing the wardrobe mistress: "She's got two things to do: carry clothes and press 'em wrong. And don't let anybody try to muscle in."). But Mildred Pierce is one of our most frequent go-to's for quotes and phrases repeated out of context that have become inside jokes. Quotes attributed to Veda proving to be a tad overrepresented. 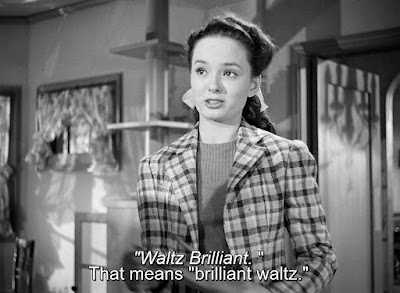 Bert Pierce: "She plays piano like I shoot pool." 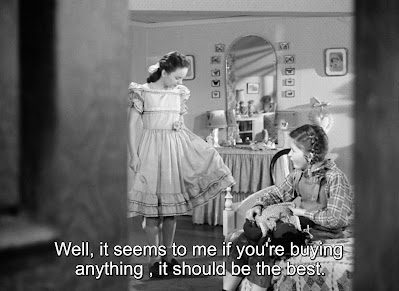 Mildred Pierce: "I took tips and was glad to get them." 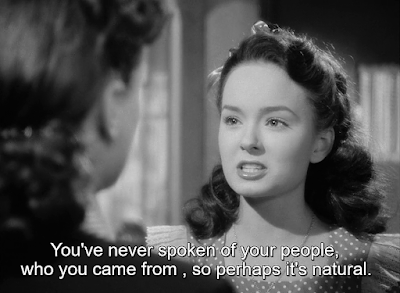 Ida Corwin: "Personally, Veda's convinced me that alligators have the right idea. They eat their young." 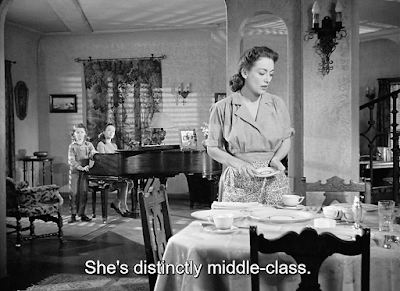 Mildred Pierce: "I know you romantic guys. One crack about the beautiful moon and you're off to the races."
Mildred Pierce may not be as dark or thought-provoking as many of the films that captured my adolescent imagination in the late-'60s, and '70s.
But when I'm in the mood for a good "comfort food movie," Mildred Piece delivers. 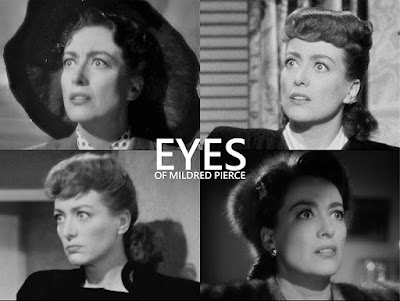 BONUS MATERIAL
In 2011, HBO premiered a five-part, five Emmy Award-winning miniseries
adaptation of Mildred Pierce that's so faithful to James M. Cain's novel
and so different from the 1945 film, there's no need to draw comparisons. 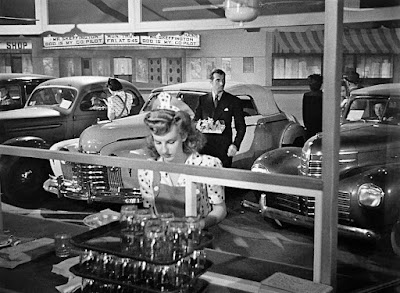 Bette Davis and Joan Crawford are forever linked in the pop-cultural consciousness, and moments like this don't help. A movie theater across the street from Mildred's Glendale eatery is showing the Bette Davis film Mrs. Skeffington (1944). Prior to this scene, when Mildred is seduced by Monte at his beach house, the music theme playing in the background is "It Can't Be Wrong" the Max Steiner/Kim Gannon melody composed for Bette Davis' Now Voyager (1942) 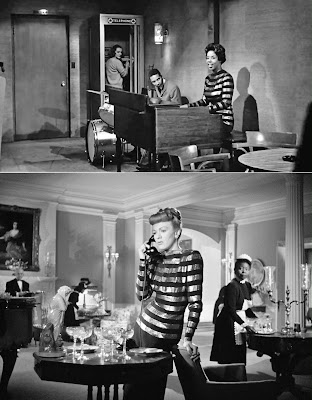 The Davis/Crawford connection continues with that slinky striped number Eve Arden's Ida wears to Veda's 18th birthday party, showing up 19 years later in the Bette-Davis-as-twins-again (A Stolen Life -1946) melodrama Dead Ringer (1964)...that's Bette in the phone booth. It's worn...sans shoulder pads...by jazz legend, pianist-vocalist, Perry Blackwell, who, as of this writing, recently celebrated her 97th birthday. Her granddaughter informed me that Ms. Blackwell was gifted the top by Eve Arden herself and that she recalls seeing it among her grandmother's performance costumes until she was about ten years old. Thanks to reader Richard Lloreda for bringing this costume rerun to my attention.
I saw "Mildred Fierce" - the hilariously spot-in Carol Burnett spoof of Mildred Pierce (The Carol Burnett Show - broadcast November 19, 1976) - many years before I saw the genuine article.  When I did finally get around to watching Crawford's film, the Burnett skit had grown so familiar, and its similarities so acute, it took a while for it to sink in that the movie was NOT, in fact, a parody of the Carol Burnett skit! 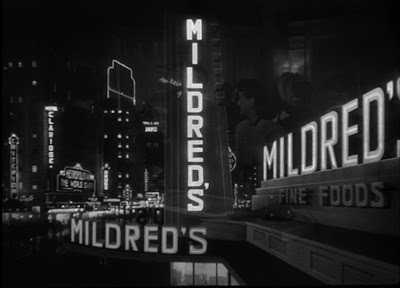