The decision to use a still from Ken Russell's The Boy Friend as the representative image for this blog was an easy one. From the time I first saw this movie in 1971 at age 14 at the Alhambra theater in San Francisco, it has remained, unchallenged in all these years, the one film which epitomizes all the magic, artistry and creativity that lie at the core of cinema's unique capacity to inspire dreams and fuel the imagination.

A surprising, if not shocking, "G"-rated departure for the director who, during this time was making a name for himself (that name being “enfant terrible”) with his exuberantly impassioned, censorship-baiting, historical dramas; The Boy Friend is "based on" a 1954 musical comedy by Sandy Wilson that spoofed '20s theatrical fluff like No, No, Nanette.  I place "based on" in quotations because, as imagined by Ken Russell, this adaptation of The Boy Friend bears but a scant resemblance to its source material. In fact, it's really like no musical I've ever seen.
Refashioning this precious little musical comedy (which afforded Julie Andrews her Broadway debut) into a scathingly trenchant commentary on show biz clichés, theatrical pretensions, thespian vanity, and dream-weaving, Russell creates something akin to a cinematic Russian nesting doll: a spoof within a satire within a pastiche within an homage. A droll valentine to Hollywood musicals, it somehow manages to be terribly sweet and sprightly while also  being howlingly bitchy.
The plot, as reworked by Russell is this: A seedy theater company in 1930's is putting on a somewhat threadbare production of The Boy Friend when they learn that the great director, Cecil B. De Thrill (Sheybal), is in the audience. Onstage, amidst technical disasters large and small, members of the troupe attempt to sabotage and upstage one another for De Thrill's attention. Backstage, rampant egos, rivalries, and romantic intrigues compound the drama presented by the inexperienced stage manager (Twiggy) having to go on in place of the show's ailing star (Glenda Jackson!) who is laid up with a fractured ankle. Throughout (in large-scale set pieces), De Thrill imagines what his film version will look like, while, in turn, the cast members project their personal wish-fulfillment fantasies onto the material they're performing. Whew!

WHAT I LOVE ABOUT THIS FILM
The Boy Friend just may be the first deconstructionist / auteurist musical. Ken Russell rather brilliantly takes an innocuous, sweet-natured musical — with nothing more on its mind than idealized nostalgia — and uses it as a vehicle through which to explore the themes of the demythologizing of popular art, the artifice of romanticism, and the passion of creativity. The very themes he returns to in film after film. The way in which Russell turns his lens on the glamour images of '30s Hollywood (as popularized in its musicals and the promise held forth in their romantic clichés) - and contrasts these with the  shabby dreams and unglamorous realities of a tatty theater troupe, makes The Boy Friend a cheerier, but no less piercing , thematic companion-piece to those other Depression-era masterpieces of deconstructed Hollywood myth: The Day of The Locust & They Shoot Horses, Don't They?

The Boy Friend is such a fun movie that it is easy to overlook the fact that Russell rather ingeniously uses Hollywood musical  clichés to comment on the way in which these Depression-era escapist fantasies fed (and mislead?) the penny-ante dreams and illusions of the populace. This is years before Dennis Potter would cover similar territory in the BBC TV drama, Pennies from Heaven.

PERFORMANCES
A true ensemble piece, The Boy Friend is one of those rare films (like Young Frankenstein) where everyone is so perfect in their roles that you can't single out an individual favorite performance. Like many directors in the '70s, Russell often worked with the same actors, creating a kind of film-to-film repertory company. The Boy Friend was my first exposure to Ken Russell so the pleasure of seeing gloomily dramatic actors from The Devils or Women in Love exhibiting such gleeful dexterity in singing, dancing, and comedy, was  a pleasure I had to experience in reverse. Quite deservedly, Twiggy received above-the-title billing and was promoted heavily on the film's release, but the movie is full of sensational actors and keenly delineated performances.
Standouts: Max Adrian as the beleaguered company manager; the wonderful Murray Melvin...looking as if he hadn't aged a day since 1961's A Taste of Honey; my personal fave, the beautiful Georgina Hale; that pint-sized, scene-stealer Barbara Windsor; and of course, the dynamo that is Antonia Ellis, who almost walks away with the film. Providing the film's splendid choreography and plenty of dreamboat appeal is former ballet dancer, Christopher Gable. He and Twiggy display a genuine likeability and chemistry together, which is welcome since their scenes are the anchors of sincerity necessary to stabilize all the cutthroat boat-rocking of the other characters.

THE STUFF OF FANTASY
Ken Russell's films rarely cease to dazzle the eye. In The Boy Friend the meticulous period detail of Shirley Russell's ingenious costumes and Tony Walton's witty and breathtaking set designs make for one eye-popping experience.

THE STUFF OF DREAMS
What played a significant factor in my early fascination with The Boy Friend was that I was unfamiliar with the work of Busby Berkeley at the time. Sure, I watched a lot of old movies on TV, but I had an elder sister who tended to monopolize the channel selector - she hated musicals and had a penchant for "black & white-shoe" pictures (her name for 50s teenage-delinquent movies. The "black & white shoe" sobriquet, a reference to the compulsory 50s accessory of saddle shoes). Consequently, I grew up with a vast awareness of the entire Mamie Van Doren oeuvre, but little knowledge of cinema choreography. I've since seen almost everything Busby Berkeley has had a hand in, and though I wouldn't have thought it possible... not after seeing Carmen Miranda cavorting amongst a sea of oversized bananas in The Gang's All Here... but in The Boy Friend Ken Russell, as some critic must have certainly noted, really manages to out-Berkeley, Berkeley. 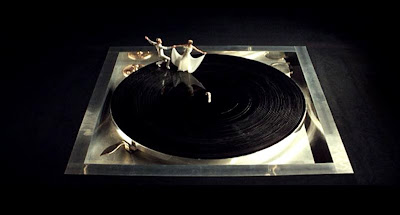 My lasting favorite and the most beautiful sequence in the film is the number that takes place atop a giant gramophone turntable. It's a homage to a sequence in 42nd Street and it's an absolutely smashing piece of filmmaking. I've never forgotten it.


The Boy Friend ranks top among my "comfort movies": those films I return to time and time again for that feeling of familiar pleasure they always guarantee. Like a child who giggles anew at the same “knock-knock” joke endlessly repeated, there is something so delightfully soothing about revisiting a beloved film that has the power to always cheer you up. Every known line of dialog, each dependable laugh, all the recognized pleasures…they reignite my sense of nostalgia (which has really increased now that I’ve reached the age of having something to actually be nostalgic about) and invite me to surrender to the long-ago-discovered charms of an old acquaintance and friend.

BONUS MATERIAL
In 1977, The Boy Friend's scene-stealing Maisie (Antonia Ellis) danced and sang in this spectacular TV commercial for Sugar Free Dr. Pepper. In this ad choreographed by Arlene Phillips of Can't Stop the Music and Annie, Ellis plays the waitress at a diner and adopts a pretty nifty American accent. The oversized pinball machine set featured in the commercial wouldn't have been out of place in Ken Russell's own pinball opera, Tommy (1975).