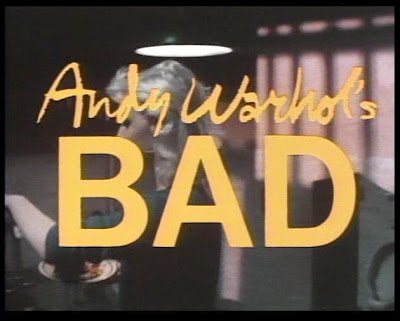 Back in my dating days, I had what I call my "Taste Test Films" (two such films, in fact: Robert Altman's 3 Women and Andy Warhol's BAD). These are films for which my appreciation is so intensely personal and self-defining that I used them as a gauge in determining the compatibility of my tastes with those of potential partners I felt I might be getting serious about. Both films are so completely my aesthetic, humor, and world view, I reasoned that if someone didn't "get" these movies and their appeal to me, they likely wouldn't "get" or understand me, either. Similarly, if you were the kind of guy who appreciated the idiosyncratic allure of these films (spanning the rather broad spectrum between acute human empathy to outrageous black comedy), it was a pretty safe bet that you'd be my kind of fella.

3 Women is such a thoughtful, intriguing film that most anyone I was interested in was likely to find something to like in it, but Andy Warhol's BAD (directed by Jed Johnson, but a delirious mash-up of those camp/trash geniuses, John Waters and Paul Morrissey) was definitely the litmus test.
Hard-as-nails housewife Hazel Aiken (a perpetually pissed-off Carroll Baker) operates an electrolysis business ("Six-Hundred and Fifty hairs an hour!") out of the home she shares with her ailing mother; ineffectual, unemployed husband; and whiny daughter-in-law (Susan Tyrrell) and grandson. To make ends meet and subsidize her cache of furs, jewelry, and perfumes, Hazel also runs a dial-up, all-girl hit squad. The dispassionate efficiency of her bloody all-female enterprise is compromised when circumstance necessitates the reluctant taking on of a slow-witted punk (Perry King). 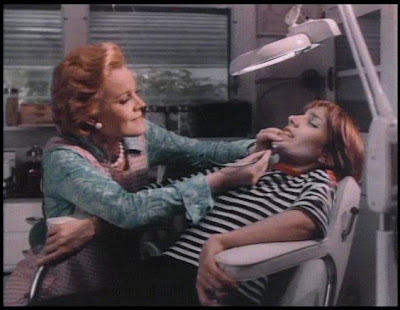 WHAT I LOVE ABOUT THIS FILM
Strange as it may seem, Andy Warhol's BAD reminds me of a simpler, gentler time in . Back when there was really such a thing as a "counter-culture"; back when movies designated as "underground" or "independent" actually were; and back when standards of morality and decency were observed by enough members of the population that they could be burlesqued in a film like this. Today we live in a country where ignorance is rewarded (thank you, Jersey Shore), bad behavior is commonplace (Arnold "The Sperminator" Schwarzenegger), and nobody denounces the hamburger for posing as steak (calling all Kardashians). Andy Warhol's BAD, once thought outrageously offensive enough to warrant an X-rating, is positively quaint and remarkably moral in comparison. You can't poke fun at tacky, suburban aspirations towards upper class chic in a world that can't distinguish class from trash.
Viewing this film feels like having front row seats to the end of an era. You just can't make a film like this anymore. When the lowbrow and sleazy becomes the cultural standard, there's nothing left to satirize. It used to be that you had to seek out underground films from Warhol or John Waters to enjoy comically amateurish performances and flat, monotone line readings. Now, you need look no further than the multimillion dollar multiplex crowd-pleasers from and Vin Diesel. Andy Warhol's BAD tries very hard to be nasty and mean-spirited - the ever-present TV is forever spewing out bad news, people perform the most heinous atrocities without batting an eye - but the entire film is kinder and more humane than any 10 minutes of The Bachelor.

Hit-girls, Marsha (l.) and Glenda (r.) flank the misanthropic Estelle as she plots revenge on a neighbor.

PERFORMANCES
To her credit, Carroll Baker held no illusions about Andy Warhol's BAD providing her with any kind of American film comeback (It was her first American film since leaving the country in 1965). Quoted as recently as June of 2011 on working on the film:

Baker's level-headedness serves her well in Andy Warhol's BAD, for she creates in Hazel Aiken (the role was originally offered to 's Ethel Mertz, actress Vivian Vance) one of cinema's most memorably twisted villains. Devilishly deadpan in her single-minded belief that she is just doing what has to be done ("I like to help people!"), if Beaver Cleaver's mom was an avaricious sociopath, she'd be something like Hazel. A woman so lacking in decency she cheerily accepts calls in her kitchen for contract killings and views Polaroids of gruesome slayings as if they were vacation slides. The only remotely competent person amongst a menagerie of slackers and oddballs, Hazel's near-constant exasperation finds amusing subtext in Carroll Baker; an Academy Award nominated, Method actress, working alongside Warhol's "actors"... many of whom sound as if they learned their lines phonetically.
(Substantiating my theory that big budgets sap the imagination of indie-filmmakers, John Waters, with a budget more than ten times that of Andy Warhol's BAD, mined similar material in 1994's Serial Mom, but it wasn't half as funny.) 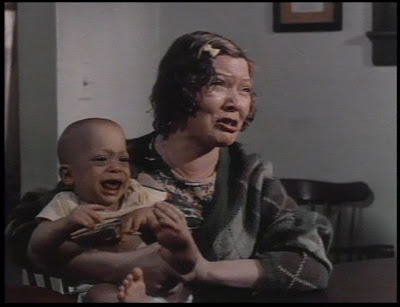 Mary - "What kind of a grandmother are you? Having baby-killers in the house with a baby? She'd kill any baby!"
Hazel - (Indignant) "She would not! She's only does what she's paid to do. You wouldn't pay her, so she wouldn't do it!"
Mary - "You're crazy! You're really not all there!"


THE STUFF OF FANTASY
All-girl hit squads were a camp/pulp staple of 70s exploitation flicks (and, my personal fave—the 1967 James Bond spoof, Casino Royale) but the women in Andy Warhol's BAD are something else again. These girls don't kill for kinky thrills, they seem to do it just because they're bored. Funniest by far are Marsha and Glenda (real-life sisters Maria & Geraldine Smith): the Laverne & Shirley of Murder Incorporated. Armed with thick accents and a canny sense of comic timing, their scenes are among the sharpest and off-the-chart hilarious in the film.

THE STUFF OF DREAMS
Andy Warhol's BAD is a darkly comedic satire on the banality of evil; a topic that's fascinated me since Rosemary's Baby (1968) posed the provocative notion that a harmless group of elderly New Yorkers could unleash the living Devil into the world. We movie fans find it reassuring when our monsters can be  easily identified—usually as crazily hateful maniacs and criminally unbalanced psychopaths. Perhaps that's because it's so unsettling in real-life to be offered evidence on a daily basis (most of which we prefer to ignore) that unspeakable evil is often perpetrated by the so-called "normal" members of our society.

Hazel Aiken's cockeyed ethical standards, which are played for absurdist laughs (a proud capitalist, she willingly kills man, woman, or child for a fee, but draws the line at vulgar language and keeping stolen property in her home), underline what is so scary about most truly evil people: they consider themselves to be the most normal of all.
Hazel, with all her pragmatic speeches about personal responsibility, work ethics, and doing what has to be done because nobody else will do it, reminds me a lot (too much, actually) of the fear-goading political candidates, flag-waving radio commentators, and defenders of family values who cloak themselves in "normalcy" to rationalize philosophies of hate.
The 1965 film The Loved One, which satirized the funeral industry, was promoted with the slogan "The motion picture with something to offend everyone!"  Twelve years later, Andy Warhol's BAD promoted itself with the New York Post review quote: "A picture with something to offend absolutely everybody." The more things change, the more they stay the same.

I find it interesting to note that today, neither of these films, which had their battles with the censors and were met with much hand-wringing over the declining state of the world, is really very offensive at all. Indeed, in failing to in any way glamorize the lives and behaviors of its principals, Andy Warhol's BAD is, as I've indicated above, very moral in its view of the world. It presents the characters as the bottom-feeders they are, and even throws a bone of hope to the audience when the lunkhead, played so nicely by Perry King, reveals that as bad as he is, he isn't prepared to do anything for money.
What's ironic are the number of safe, family-friendly entertainments of yesteryear (classic films, Warner Bros. cartoons, TV sitcoms) that, due to blithely accepted attitudes of sexism and racism, I consider to be blisteringly offensive today. (One example: an entire episode of the "feminist" 60s sitcom That Girl actually attempts to extract laughs from the far-from-hilarious plot point of a husband breaking the jaw of his loudmouth wife with an ashtray.)
Talk about the banality of evil.
Oh, and for the record, both of my "Taste Test" films have been officially retired. I showed them to a fellow I was dating who not only loved them as I did, but, on a single viewing, opened my eyes to insights and jokes contained in both films that I had never seen before. Understandably, I couldn't let a guy like that go. That was 16 years ago going on 17, and we still get a kick out of re-watching these films together. Even after all these years we can make each other laugh just by uttering the raging Estelle epithet: "O'Reilly O'Crapface."