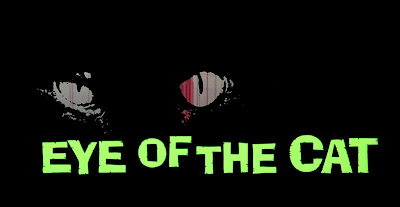 Why this nifty little thriller is so forgotten and nowhere to be found today is a mystery. It's really a rather intriguing, if sometimes uneven, attempt at mixing Hitchcockian suspense with the kind of supernatural theater of the macabre one might associate with an old episode of Night Gallery. Prior to its release in theaters, Universal Studios generated considerable public interest with TV ads which prominently featured a scene depicting a little old lady in a runaway wheelchair careening helplessly towards traffic (backwards yet!) down a particularly precipitous slope of one of San Francisco's many hills. As a San Francisco resident at the time, these commercials made Eye of the Cat the must-see movie of the summer of '69 as far as I was concerned.

To clarify, said “little old lady” is three-time Oscar-nominee Eleanor Parker, who was just 46 at the time. Although unfamiliar to me then, Parker, this being just four years after her glamorous turn as the Baroness inThe Sound of Music, was another talented actress "of a certain age" (a la Jennifer Jones, Joan Crawford, Lana Turner, Bette Davis, and Tallulah Bankhead) who found herself prematurely relegated to “horror hag” roles in youth-centric '60s thrillers that took as a given audiences finding women over the age of 30 to be as grotesque as Hollywood apparently did.
Eye of the Cat was one of the earliest films to exploit the subtle malevolence and flagrant creep-out factor of packs of animals. A trend that blossomed into a full-blown horror sub-genre in the '70s with films like Willard, Empire of the Ants, Kingdom of the Spiders, and the laughably non-threatening Night of the Lepus (giant bunnies!). I saw Eye of the Cat at San Francisco's Embassy Theater on Market Street, and could hardly contain my anticipation. Not being much of a fan of cats (that has since changed) the movie fairly gave me the willies, and, in short, scared the hell out of me...but that didn't stop me from sitting through it three times.
Joseph Stefano, screenwriter of Alfred Hitchcock’s Psycho, penned this original screenplay about feline seductress Kassia Lancaster (“It sounds like a cell door slamming shut.”) and her plot to secure the fortune of an ailing San Francisco matron (Parker) by returning to the lonely dowager her beloved derelict nephew, Wylie (Sarrazin), and arranging for her subsequent murder once her will has been altered in his favor. Danielle (or Aunt Danny as she's affectionately/derisively known) is a near-invalid suffering from acute emphysema and lives in a cavernous San Francisco mansion with Wylie’s younger brother, Luke (newcomer Tim Henry), who waits on her in apathetic servitude, and roughly a hundred overprotective cats, the sole benefactors of her will. Kassia's diabolical plan hits a major snag when it's discovered that Wylie, the linchpin of the whole operation, is plagued by crippling ailurophobia: a deathly fear of cats.

Eye of the Cat is not really the “When Good Animals Go Bad” creature-features thriller its title would suggest (a plus, I might add) but rather an intriguing attempt to modernize those murder and passion crime thrillers that once typified film noir (Gayle Hunnicutt, with mounds of big, '60s hair, is a terrifically ruthless femme fatale) combined with the supernatural chill-thrill of say, classic horror of Val Lewton (Cat People). I’d like to report the experiment was wholly successful, but it kind of loses steam in the middle, only to end just as it’s becoming the shuddery thrill ride it should have been all along. Perhaps in more resourceful hands than those of director David Lowell Rich (The Concord… Airport ’79, need I say more?), Stefano’s somewhat colorless script could have lived up to the promise of the film’s sensational (silent) pre-credits sequence.

The raw material is certainly there: an enigmatic villainess; the San Francisco setting (a wonderful city for thrillers—the picturesque angles of all those hills never fails to unsettle); the misleadingly simple murder scheme; the probable subterfuge and concealed motives behind virtually each action engaged in by every character at all times; and the fascination of cats and their inherent mystery. But perhaps it's because there IS such a rich mine of suspense/chiller material to vein that makes one wish Joseph Stefano's script were more up to the task set forth by the premise. Luckily, Eye of the Cat's gratuitously cryptic dialogue is delivered by a better-than-average cast, all of whom appear gleefully game for this kind of psycho-fright stuff; and the enjoyably peevish malevolence at the heart of the story greatly mitigates Mr. Stefano's penchant for trying to generate mystery by leaving his characters and their motivations underdeveloped and unexplored to a maddening degree.

Canines (the four-legged kind) can be scary in real life, but for a dog to scare me onscreen, it has to be either one of those dogs with a face like a fist (a Rottweiler or a Pit Bull) or one of those wolf-snout dogs like in Samuel Fuller's White Dog. Cats, on the other hand, merely have to be themselves. Cute or creepy, cats introduce an element of uncertainty just by showing up, and they always appear to be operating under their own mysterious, sinister agendas. This calls to mind a Night Gallery episode I once saw that made use of a quote from Samuel Butler’s novel, Erewhon: “Even a potato in a dark cellar has a certain low cunning about him which serves him in excellent stead.” If ever two words perfectly summed up my impression of cats, it’s the words “low cunning.” 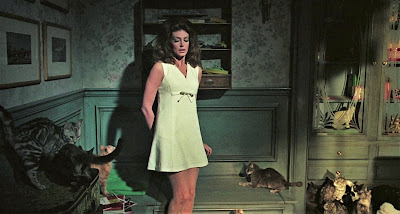 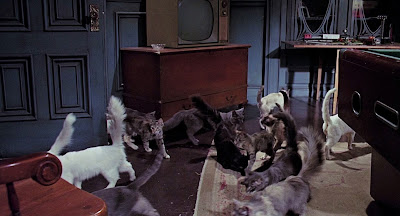 Pussy Galore
The animal wrangler/trainer for the armies of felines used in Eye of the Cat is the late Ray Berwick, who also served as the bird trainer on Hitchcock's The Birds. In 1986 Berwick shared his techniques in the well-received book The Complete Guide to Training Your Cat.


My long-held distrust of cats played into the effectiveness of Eye of the Cat the same way a childhood spent in Catholic schools played into my enjoyment of Rosemary’s Baby the year before: it wasn't compulsory, but it helped. And what I like about both films is that in their basic structure, they work perfectly fine whether one buys into the supernatural angle or not.
Eye of the Cat generates genuine tension as a crime caper thriller, keeps you guessing as a psychological suspense flick, and works your nerves as a supernatural horror film about potentially pernicious pussycats. With so many plots to juggle, Eye of the Cat can perhaps be forgiven the mood-killing miscalculations of throwing in an obligatory '60s party scene and a lengthy “love montage.” (For some reason, the '70s was the era of the romantic montage. This cheap and economic go-to device for writers unable to plausibly convey a developing romance has ground many a promising film to a grinding halt. Perhaps the worse offender being Clint Eastwood’s 1971 directorial debut, Play Misty for Me, in which a pretty good suspense thriller takes a 20-minute nap while Clint gives us a Carmel, California travelogue and infomercial for The Monterey Jazz Festival.)


PERFORMANCES
As a longtime fan of glamorous tough broads in movies, it’s obvious why Gayle Hunnicutt’s Kassia Lancaster is my favorite character in the film. She states early on, “I’m not afraid of anything!” and spends the rest of the movie proving it. Dangerous, self-assured, authoritative, and without a doubt the strongest, smartest character in the film; female characters of her stripe would become extremely rare in the '70s as male-dominated “buddy films” grew in popularity. The fantastic-looking Gayle Hunnicutt gives an assured performance whose measured severity plays nicely off of Michael Sarrazin's more easygoing passivity.


THE STUFF OF FANTASY
I love a thriller that keeps me guessing, and Eye of the Cat is splendid at throwing so many red herrings and false clues into the pot that no matter where you think the film is headed, it veers elsewhere. But as good a film as it is, and as much as I found it scary and suitably creepy as a pre-teen, I'd be lying if I said that the prodigious amount of male flesh on display in Eye of the Cat didn't in part inspire those multiple viewings at The Embassy back in 1969. 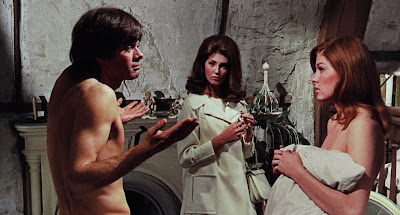 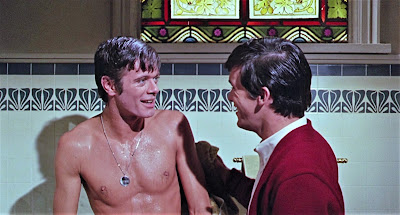 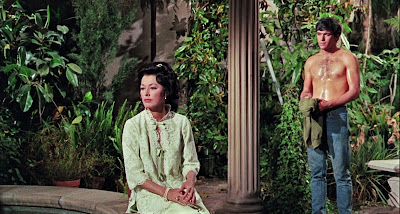 Perhaps in an effort to convey his character's freewheeling ways, Michael Sarrazin spends a great deal of the film shirtless or with nudity artfully concealed. Similarly, dreamboat material co-star Tim Henry (bottom pic with Eleanor Parker) adds a touch of homoerotic interest to a film already overflowing with adultery, promiscuity and possible incest. Hooray for Hollywood in the '60s!

THE STUFF OF DREAMS
A highlight of Eye of the Cat are its photogenic San Francisco locations. From The Birds, to Vertigo, to What's Up, Doc?, movies shot in San Francisco invariably gain nostalgia points from me. Eye of the Cat makes good use of locales that establish a dynamic sense of time and place. 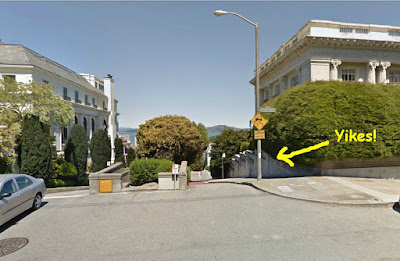 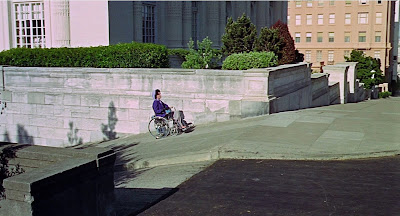 The site of the film's centerpiece scene is the ritzy Pacific Heights district of San Francisco. Specifically the hill on Octavia Street and Washington beside the landmark 1912 Spreckles Mansion. The top photo is as it appears today, below, a screencap showing how the wall looked before the overgrown hedges.

Eye of the Cat is no classic, but it's a dynamo of a thriller that doesn't deserve its relative obscurity. It certainly holds up for me after all these years, and still packs a punch despite my having overcome my own youthful antipathy toward cats.
Copyright © Ken Anderson