SUMMER MOVIES AND THE BLOCKBUSTER MENTALITY

The Summer Movie Season:  Sit-Out or Be-In?*:
A child of the 60s looks at the phenomenon of the summer blockbuster
*For the uninitiated, a “Be-in” was a 60s counterculture social event (a “happening”) similar to a “Love-in.” 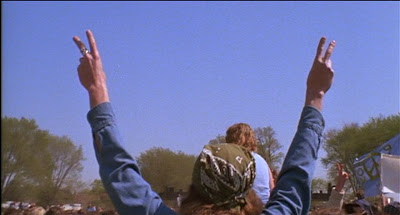 Like many people my age (never mind), I have a tendency to look back on specific aspects of the past through decidedly rose-colored glasses. Motion pictures in particular are vulnerable to this alchemy, as I fell in love with movies during the late-60s and 70s: a time of groundbreaking innovation in film.


The growing pains of American cinema that typified the New Hollywood years, in many ways mirror my own. Both the era and the films it produced are inextricably linked in my mind to my adolescence and my nascent understanding of the world. So much so that if often felt that Hollywood and I were both growing up at the same time.
While such a subjective, emotional response to movies is at the core of every film buff, the negative by-product of such a polarized form of passion is that it makes one’s assessment of past films dangerously prone to a nostalgic sentimentality. Nothing wrong with deserved praise meted out to the films of the past, just so long as that rear-view adulation doesn't prevent the fair and objective evaluation of contemporary films.

A typical rant of mine is to bemoan the annual summer blockbuster season. I complain about the dearth of watchable films released during the summer months and bellyache about how those without a taste for sequels, comic books (pardon me, graphic novels), or Michael Bay blowing things up, must content themselves with Netflix or cable until September.
(MORE ...read my complete article HERE on Moviepilot ).

The winter and fall months were once reserved for high-profile holiday releases, films hoping for Oscar attention, and the so-called “prestige-film” (self-serious movies - often with literary, historical  or cultural significance - that may or may not have had big boxoffice potential, but were calculated primarily to bolster a studio’s image as a maker of important, “quality” films).  Summer was once the season studios chose to release their difficult-to-categorize films. Films that took chances or failed to fit specific marketing genres.


A great many of my all-time favorite movies that have gone on to become classics were summer releases. Something I can't imagine myself saying about today's crop of overproduced CGI cartoons...even if I were a target-demographic adolescent.

Click on the titles below to read more extensive commentaries on each film.

Of course, I’m not an absolute, head-in-the-clouds idealist. I’m well aware that if a work of corporate calculation like the entire Marvel Comics movie franchise can literally rake in billions for what is essentially a money-making industry….that’s the direction things are going to continue to go. But as any child of the 60s can tell you, what’s good for The Establishment and Big Business isn't exactly good for humanity.

The Summer Blockbuster Season has a lot in common with the lyrics to the Adam Freeland song, “We Want Your Soul”