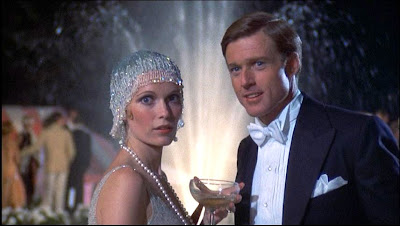 Click on the title link below:
A Look Back at the 1974 adaptation of F. Scott Fitzgerald’s “The Great Gatsby"

Its superfluous 3-D aside, were I 16-years-old (my age when I caught 70s "Gatsby Fever"), I would be all over this rather dazzling-looking remake, critics be damned. It'll be interesting to see how a new Gatsby for a new generation is received. Remakes are a curious and inextricable part of the Hollywood moviemaking machine. Cynical in their calculated desire to recapture what has come before, yet they also possess a very Gatsby-esque type of optimism in hoping that perhaps, "this time" will be different.

"So we beat on, boats against the current, borne back ceaselessly into the past."
F. Scott Fitzgerald - The Great Gatsby