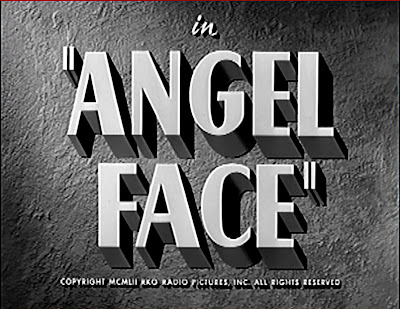 As a child, the only film directors whose names and faces I recognized were Alfred Hitchcock and Otto Preminger. Hitchcock: for the obvious reasons (Honestly, was there ever such a talented, yet at the same time, tirelessly self-promoting, self-mythologizing director? One had to wonder when he found time to plot out all those famously intricate shots while still having the energy to chase Tippi Hedren around the set); and Otto Preminger: for his frequent, colorful and quotable appearances on television talk shows like Merv Griffin, but especially for his portrayal of supervillain, Mr. Freeze, on the Batman TV series.

Based on the quality (or, more accurately, the lack) of his latter-career output (Hurry Sundown, Skidoo, Tell Me That You Love Me, Junie Moon, Such Good Friends), for the longest time I considered Otto Preminger more an eccentric TV personality than a serious director. It wasn't until my late-in-life exposure to some of his earlier films on TCM that I came to appreciate the diversity of this filmmaker’s output and the strides many of his films made in the battle against censorship.
Although I still only enjoy but a handful of the films Preminger directed in his nearly 50-year career, among my favorites is Angel Face. A film, if Hollywood legends are to be believed, green-lighted by RKO studio head Howard Hughes specifically to make life miserable for soon-to-depart contract actress and recent Hughes object-of-obsession, Jean Simmons. (Check out IMDB’s Trivia section for details, or better still, the commentary track on the DVD.)
The plot of Angel Face is your typical '50s femme fatale film noir to the point of déjà vu. Yet, one enlivened considerably by a particularly unsympathetic turn by genre stalwart Robert Mitchum, and the pleasingly against-type assaying of the role of an alluring psychopath by the beautiful, but to me, usually ineffectual, Jean Simmons.

Ambulance driver Frank Jessup (Mitchum) falls for dark-eyed socialite/siren, Diane Tremayne (LOVE that name!) when called to her estate to look into a suspicious case of gas inhalation suffered by Diane’s wealthy stepmother. With surprisingly little effort on her part, the distraught but grateful heiress insinuates herself into the life of Frank and standby girlfriend Mary (Mona Freeman), successfully opening up a chasm between the couple she’s more than willing to step into. In record time, and without alerting the suspicions of the shrewd but somewhat opportunistic Frank, Diane not only gets the laid-back lothario to detail for her the particulars of his love life and professional aspirations (a former race car driver, Frank dreams of opening a garage of his own), but unsubtly unburdens herself to him her own woeful tale of how she and her beloved father (Herbert Marshall) have fallen under the despotic sway of her bridge-club-addicted, purse-strings clutching, wealthy evil stepmother, Catherine (Barbara O’Neil).

Faster than you can say Double Indemnity and before that hearkened-after postman has had a chance to ring even once, Frank and Diane find themselves suspects in a nasty case of double homicide. Was it really an accident? Were they in on it together? Did you ever doubt it for a minute? To fans of the genre, the who, what, where, and whys of the plot won’t come as much of a surprise. What really makes Preminger’s steamy goulash of Raymond Chandler and James M. Cain so much black-hearted fun are its characters. The dark alleys of obsession and fixation Angel Face takes you through are murky with hidden agendas, neurotic pathologies, and the kind of moral cynicism that made noir films such a narrative oasis in the desert of suburban conformity that was Hollywood in the postwar years.


WHAT I LOVE ABOUT THIS FILM
I've always had a thing for film noir. I love all the intrigue, double-crosses, plot twists, and 11th hour surprise reveals characteristic of the genre, but what has always appealed to me most is the genre's core of nastiness. It always seemed like such a brazen challenge to the Production Code-mandated moral conventions of the day.
In today’s climate of moral relativity, we have iniquity devoid of stakes. Barring an overriding imperative of decency, the kind of bad behavior exemplified by Charlie Sheen, Chris Brown, Lindsay Lohan, and the whole reality show “betray each other to win” mentality, exists within a misanthropic vacuum. That's why I have no patience with contemporary films which revel in the display of bad people behaving badly (cue, Quentin Tarantino); there's no measurable "good" behavior in these films for contrast.
Conversely, film noir works as the yin to the yang of America's idealized self-perception during the '40s and '50s. A time when movies, TV, and advertising all promoted a standard, middle-class image of conformity typified by those “social guidance films” shown in schools back then.
The nihilism of film noir stood as a thrilling alternative to all those inevitable happy endings in movies from the 1940s & '50s. It is almost exhilarating to see movies in which people operate out of flagrant self-interest and behave in ways totally unconcerned with bettering society or helping their fellow man. Another nice difference is that so many of the women of film noir are so independent-minded. They're dangerous, sexually aggressive, and exert power over their lives. These extreme cultural contrasts are what give film noir its kick. Without the subtextual context of a repressed culture for the lead characters to rebel against, film noir would be like a great many of the movies and TV programs of today: just a bunch of unsympathetic people meeting bad ends.

PERFORMANCES
Prior to seeing Angel Face, I’d read so many accounts of how unhappy Jean Simmons was during the making of the film that I leapt to the assumption that her portrayal of a wicked vamp was one of those against-type embarrassments like Jennifer Jones in Duel in the Sun (Simmons' embarrassment would come many decades later, as Helen Lawson in the 1981 TV version of Valley of the Dolls). I couldn't have been more wrong. Although I've only seen Simmons in a handful of films (she’s particularly appealing in 1953s The Actress), her Angel Face femme fatale is one of her strongest, most persuasive screen performances.
Of course, Simmons’ performance is greatly enhanced by the chemistry she shares with co-star, Robert Mitchum. A sleepy-eyed hunk o’ burnin' love a person doesn't need Method Acting to believably express a sexual obsession over. Mitchum may not be an actor with a particularly broad range, but within that range, there’s not another leading man who can touch him. In the films I consider to be his best: Angel Face, Out of the Past, His Kind of Woman, Cape Fear, and The Night of the Hunter, Mitchum's slouching brand of masculine charisma has always revealed a hint of vulnerable malleability. Either that or outright sexual menace. In either instance he dominates the screen with a natural ease that makes him a charismatic, fascinating actor to watch.

Fans of film noir generally agree that much of the genre’s predominately male perspective is fueled by a fear of women. Perhaps that’s what makes them so entertaining. It's like the male id unleashed...a woman with any kind of power perceived only as a threat to manhood. Indeed, unlike the self-sacrificing heroines of the popular “women’s films” of the day, the women of film noir tend to call all the shots and are as likely to kill a man as kiss him. Angel Face consistently juxtaposes Frank's loutish neglect of his girlfriend Mary, with his being manipulated and led around by the nose by the scheming Diane. At a time when women held very little social power and were inevitably relegated to supporting, serving, and supplicating, film noir provided one of the few arenas where women were allowed to show some moxie and guts. Alas, because the vast majority of these films were written and directed by males, women with power were also almost always made to pay for their gender transgressions, with "natural order" usually restored by fadeout.
The world of Angel Face is one where the natural order is corrupted by domineering women (Diane, Catherine, and Chiyo) and emasculated men (Frank, Charles, and Ito, the household butler who laments, "The only trouble with America...it spoils the women!").


THE STUFF OF DREAMS
If I were to pick my absolute favorite Otto Preminger movie, it would have to be Bonjour Tristesse (1958), that film is just a dream. But for pure noir bliss, I rate Angel Face above even the superior Laura (1944), which in spite of its excellence, has always seemed a tad too cool and never really has done much for me. Angel Face has the feel of a cheap pulp novel brought to life, complete with its economy of narrative and straight-to-the-point characterizations. While falling short of being a true classic of the genre, it stands as an example of the genre at its best. A fast and dark thrill ride through the Hollywood Hills...but I'd skip the short-cuts if I were you. 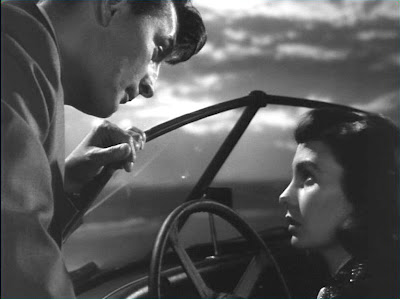