A THOUSAND WORDS: The Art of the Movie Publicity Still

There really ought to have been a special Academy Award category devoted to the creative artists behind the Classic Hollywood studio publicity still. Tasked with capturing the essence of an entire motion picture via a single photographic image, the resourceful, creative, obviously twisted minds responsible for these memorably dynamic, sometimes downright weird publicity photoshoots were the unsung geniuses of movie marketing. The overlooked masters of visual shorthand.
Unlike traditional movie stills, those on-set, taken-in-the-process-of-filming production photos displayed in movie theater lobbies depicting movie scenes from vantage points approximating the cinematographer's POV—the Hollywood publicity still shares no such allegiance to reality.
Used as flexible, all-purpose tools of movie marketing and promotion (poster art, press books, programs, sheet music, fan magazines, newspaper blurbs) publicity stills can be anything from glamour merchandising to conceptual flights of fancy. The scope of what a publicity still could be was so broad, there didn't appear to be many rules that had to be adhered to. So long as cast members were dressed in character, it seemed the sky was the limit as to what the photo itself could be. Art and commerce collide in images that run the gamut from cheesecake to cheesy. Whether utilizing posed tableaus to recreate dramatic sequences from a film, or as stylized evocations of exploitable narrative themes, at their best, they stimulate interest by honing in on the essence of a movie. At their worst (i.e., most fun) they are kitschy, laughably misguided headscratchers capable of achieving almost surreal levels of overwrought theatrical intensity.
And the world's all the better for it.
Here are a few of my favorites:
In this dramatized publicity still for Alfred Hitchcock's Vertigo (1958) Jimmy Stewart (or a broad-beamed stand-in) is faced with an embarrassment of riches when it comes to the number of available Kim Novaks at his disposal for possible strangulation.

One of the oldest and most enduring of the standard movie publicity poses is the "dramatic clinch" shot. Here ratcheting up the sex and suspense while eyeing an unseen menace are (l. to r.): Robert Montgomery and Audrey Totter in Lady in the Lake (1947), John Saxon and Sandra Dee in Portrait in Black (1960), and mononymous ice-skating star Belita and Barry Sullivan in Suspense (1946).
A looming Claudia McNeil gives vent (somewhat unconvincingly) to her maternal frustration while a distracted Sidney Poitier strikes the universal "I've got a pain in my tum tum" pose for A Raisin in the Sun (1961).
Fretful Doris Day and her phone-accommodating flip hairdo are unaware of the threat lurking in the backlit doorway in this intense publicity shot for Midnight Lace (1960). Meanwhile, Patty Duke ponders how far the mighty and self-centered have fallen while supervised by a shirtless symbol of her degradation in this artfully posed promotional still for Valley of the Dolls (1967) that ultimately made it into the U.S. one-sheet poster art. 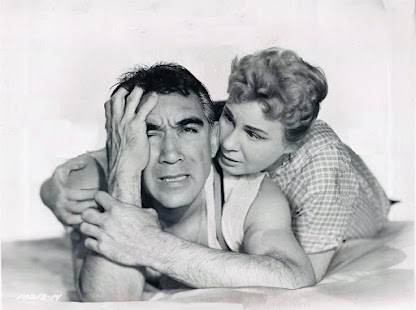 This publicity still for the overheated "sweat & sweet-tea" domestic melodrama Hot Spell (1958) is pretty much on the nose in capturing what this movie is all about. It's a safe bet that whatever is suggested to you by this image of an anguished Anthony Quinn and solicitous Shirley Booth...is exactly what you're going to get.
The stagy theatricality of these two frames-within-a-frame compositions may inspire giggles, but they also offer a healthy dose of mystery and plenty of visual appeal. Skeevy-looking John Ireland will have you wondering whether he's breaking in or out in I Saw What You Did (1965). And the ambiguous expression on the face of poodle-cut cutie Peggy Ann Garner could be that of either the spider or the fly in this sticky web image for Black Widow (1954).
The better to conceal its surprises, advance publicity stills for Alfred Hitchcock's Psycho (1960) were intriguingly vague exercises in misdirection. The stars were posed in groupings and compositions designed to give the right, wrong impression. Here, decades before Clint Eastwood's GOP senility stunt, an empty chair holds dominant visual sway while a correspondingly wooden John Gavin protectively embraces apprehensive co-stars Vera Miles and Janet Leigh. 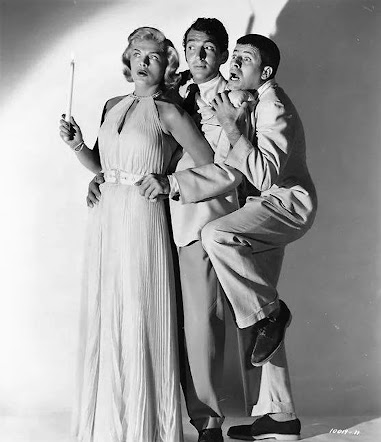 In a welcome change of pace, comedy pair Dean Martin and Jerry Lewis are the ones quivering and quaking as they seek shelter behind lovely Lizabeth Scott in Scared Stiff (1953)
Publicity stills for musicals and comedies are all about communicating movement, excitement, and lightheartedness. Thus, gag poses, broad mugging, and beaming stars engaged in wacky shenanigans are the order of the day. Here, jazz-handed Gene Kelley and Debbie Reynolds do-wacka-do & vo-do-de-o-do to a fare-thee-well for  Singin' in the Rain (1952). Next to them are "teenagers" Ann-Margret and Bobby Rydell getting high for Bye Bye Birdie (1963). 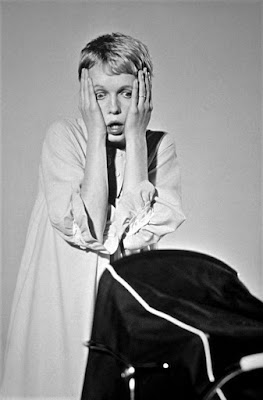 An outtake from a publicity photo shoot for Rosemary's Baby (1968) that wins major points for that Woolworth's baby buggy and Mia Farrow's really-not-all-that-into-it emoting.
Something about this picture of Wendell Corey and Joan Crawford for Harriet Craig (1950) feels a little off (her head position and body placement look all wonky). Otherwise, it's a classic, standard publicity pose signifying romantic melodrama.
Academy Award-winning actor Jose Ferrer made his directing debut with The Shrike (1955), a noirish domestic melodrama that keeps tripping over its casual misogyny. As star and director, Ferrer's fondness for gifting himself numerous closeups in the film is mirrored in this striking pose that finds a partially obscured, non-smiling June Allyson clinging, raptor-like to her hunk with the hangdog expression. For all the drama of this image, it's the band-aid on Allyson's hand that draws my attention.
The time-honored "leg cling" pose of fantasy art and pulp paperbacks tends to look even more absurd when rendered in the flesh. And flesh is just one of several points of variance between these publicity stills. On the left, middle-aged alpha Gary Cooper looks ready to take on the world for evening-gowned clinging vine Patricia Neal in The Fountainhead (1949). On the right, clothing-challenged married couple Claire Wilbur and Gerald Grant (standing) agree that three's company, provided kneeling neighbor Calvin Culver is ready to make room for daddy in Radley Metzger's Score (1973).
Burl Ives tries to reason  with Tony Perkins in Desire Under the Elms (1958) 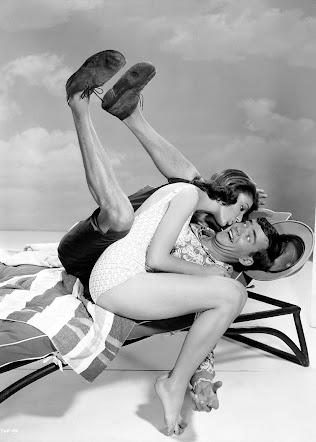 If ever there was a woman who could get a guy to simultaneously lose his pith helmet and throw his chukka boots in the air, it's leggy Paula Prentiss. In this top favorite publicity still, six foot five Jim Hutton willingly succumbs to Prentiss' five foot ten charms to promote Where the Boys Are (1960).
Well, the conflict in The Heiress (1949) isn't really a romantic triangle so much as a case of 19th century cockblocking, but you get the idea. However, what the oozing-with-acrimony photo of Harry Belafonte, Dorothy Dandridge, and Joe Adams for Carmen Jones (1954) has in common with the icy arrangement of Montgomery Clift, Olivia de Havilland, and Ralph Richardson below, is that each publicity still attempts to create dramatic tension by not having any two people in the frame looking in the same direction. 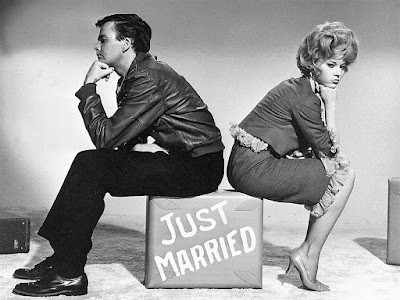 Jim Hutton and Jane Fonda again, this time appearing in what might be looked upon as the perfect,  quintessential movie publicity still. It does everything a marketing movie still is supposed to do. From the costuming, poses, props, and actors' expressions, you don't have to know anything about Tennessee Williams' Period of Adjustment (1962) to look at this photo and instantly know everything. One image says it all.

I leave you with this terrific shot from a publicity photo shoot with Jessica Walter and Clint Eastwood that ultimately led to the creation of the poster art for Play Misty for Me (1971). A photo whose comic artificiality stands as a great reminder of all the illusion, fantasy, and magic that's sold to us by the movies. No wonder they call Hollywood The Dream Factory. 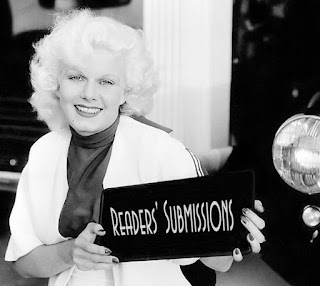 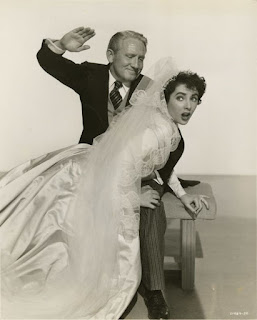 D. Kucharski submitted this odd Daddy Dearest-style publicity still of Spencer Tracy looking a little too into spanking Elizabeth Taylor for the Vincente Minnelli comedy Father of the Bride (1950). 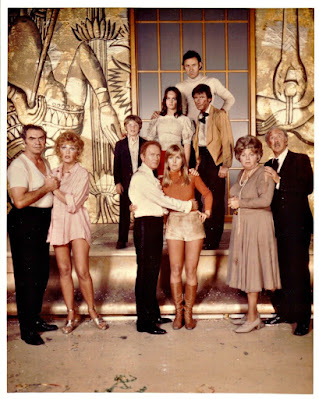 Blogger Poseidon submitted this Grand Hotel-style publicity still for The Poseidon Adventure (1972). A leg-centric, all-star cast grouping that serves up 3 variations on the "dramatic clinch" pose. As with all the photos on this blog, you can click on them to enlarge. That way you can get a better look at Carol Lynley (ironically, the film's most hysterical character) failing to get into the spirit of things by joining her castmates in looking fearful. Then there's Eric Shea forgetting that his life is supposed to be in peril and presenting his best "grade school picture day" smile. And at the top, like the star on a Christmas tree, we have Gene Hackman's unfortunate male bouffant. 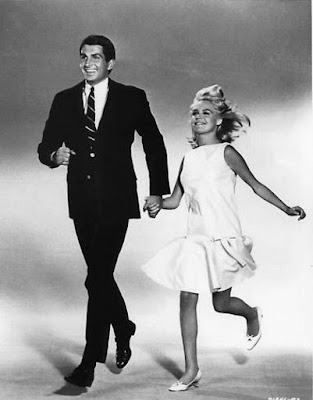 B. Zwinge submitted this walking-on-air image of what I initially thought to be hyper-tan mannequin George Hamilton and a little girl. It is indeed Hamilton, but said little girl is 24-year-old Sandra Dee. This Stride-Rite shoe ad of a publicity still is for the unwatchable 1967 sex "comedy"  Doctor, You've Got to be Kidding!
Copyright © Ken Anderson   2009 - 2021
Posted by Ken Anderson at 3:38 AM