If you’ve ever read a celebrity memoir, sat through an episode of Inside The Actors Studio, or listened to an Academy Award acceptance speech, you know that artistic challenges are the raison d’être of the working actor. At least to hear them tell it. Sometimes after listening to these luminaries wax exhaustively about their commitment to creative risk-taking and honing their “instrument,” I’m compelled to go to my computer and check out IMDB to remind myself that yes, indeed, that WAS Ms. or Mr. Master Thespian I last saw reprising that stock character for the umpteenth time in the newest installment of “Name That Overworked Movie Franchise.”
I’m not making light of the seriousness with which actors approach their work. Certainly not in this day and age when the Marvel and DC movie universes have me nostalgically pining for the now very distant past when actors spent more time in acting classes than in gyms. No, I’m just making an observation about how the “industry” side of the movie industry has a way of countering what I presume is the actors’ natural artistic impulse—to have their work reflect a creative range and versatility…
TOOTSIE (1982)
Casting Director: “We’re looking for somebody different.”
Michael Dorsey: “I can be different.”
…with words more appropriate to a supermarket: Give me something I can sell.
The studio system may be long dead but the star system lingers on. And no matter how talented or versatile an actor is, big screen employability consistently boils down to being a marketable “type.”  A reality of the movie business that most actors seem to accept (or reconcile themselves to). That is, until being too closely associated with a specific image or too often identified as a particular type leads to the kind of role-selection pigeonholing that ends up in being typecast.
As the careers of many of Hollywood’s biggest stars, past and present, would attest, typecasting in and of itself isn't necessarily a bad thing for careers. Say the names Cagney, Day, Wayne, Dietrich, and a particular kind of role pops into mind. That's how movie stars are made and how Hollywood was born. And certainly, amongst those factions of pop-culture consumers who crave a steady diet of the exact same thing (Fast and Furious, Halloween, Transformers, et al.), typecasting is essential and doesn't detract from one's enjoyment of the franchise "brand."
Me, I don’t mind a bit of typecasting now and then, but on the whole, I tend to lean toward the axiom that what’s good for business is often bad for art.
When it works, typecasting serves as a sort of visual shorthand for the audience and has actors playing to their strengths (the fits-like-a-glove casting of Shelley Duvall as Olive Oyl in Robert Altman's Popeye - 1980 ). At its worst, it leads to acting's #1 cardinal sin: being boring. Few things make you feel the passing of every ticking second than witnessing an actor on cruise control giving the same, stale, by-the-numbers performance they’ve given several times before.
When typecasting results in actors playing it safe, it reinforces the familiar and undercuts the essential element of surprise that gives all good performances authenticity and immediacy. This is why I love it when actors occasionally break away from what they’re used to and take the risk of playing against type. The results can be astoundingly good or jaw-droppingly awful, but they’re fresh. Even if I don’t like the end, I tend to respect the moxie it took to go artistically out on a limb.
Limiting my selections to the films in my collection, here - in no particular order - are my
TOP TEN FAVORITE AGAINST-TYPE PERFORMANCES. 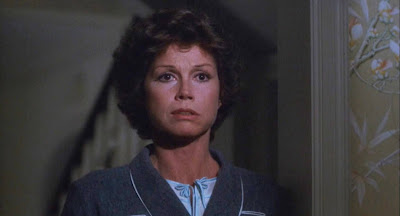 Mary Tyler Moore in Ordinary People (1980)
Having heretofore assumed sitcom sobbing and crying out "Oh, Rob!" in a quavering voice to represent the full scope of Moore's dramatic ability, you can imagine how gobsmacked I was by the raw honesty she was able to bring to her Oscar-nominated performance as the emotionally-rigid matriarch of a dysfunctional suburban family in Robert Redford's directorial debut. The highest compliment I can pay is to say that while watching her performance, I never once thought of Laura Petrie or Mary Richards. 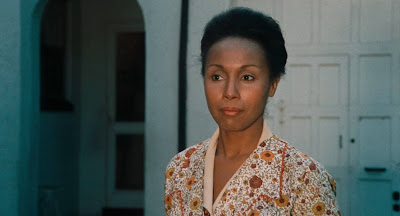 Diahann Carroll in Claudine (1974)
Carroll’s sole Academy Award nomination was for a performance in a film the actress/singer with the aristocratic bearing would never have been considered but for the insistence of best friend Diana Sands (originally cast, she fell ill during filming and died of cancer shortly after). Playing a single mother of six trying to make ends meet as a housekeeper, Carroll is relaxed and accessible in a way I hadn’t seen before. Given the opportunity to play a character of some complexity, she proved there was more to her than sequined gowns and impeccable bone structure. 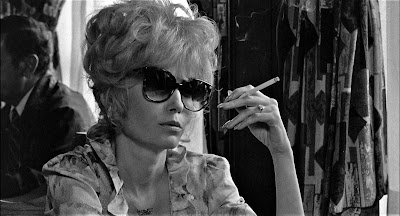 Mia Farrow in Broadway Danny Rose (1984)
Mia & Woody. In retrospect perhaps it took a relationship as fucked-up as theirs for it ever to occur to someone to cast cinema's eternally fey flower child as the tough-as-nails mistress of a borscht belt lounge crooner. Farrow’s transformation—from body language, voice, to her heretofore untapped gift for characterization—is nothing short of startling. I was floored when she wasn't Oscar-nominated. (I always wondered if her hilariously coarse portrayal was in any way inspired by the wives and mistresses of Frank Sinatra's Vegas cronies she must have encountered during their brief marriage.) 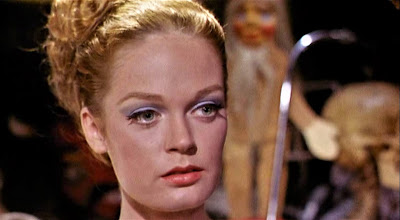 Elizabeth Hartman in You're a Big Boy Now (1966)
Playing a narcissistic go-go dancer with a sadistic streak and a temper as short as her miniskirts, Hartman being cast as the unattainable dream girl Barbara Darling was hailed by Life magazine as the single crowning inspiration of novice director Francis Ford Coppola’s film. And they’re right. Pigeonholed early in her career as the introverted, luckless type, Hartman’s performance is a textbook example of the surprising things that can be unleashed in an actor when typecasting is thrown out the window. 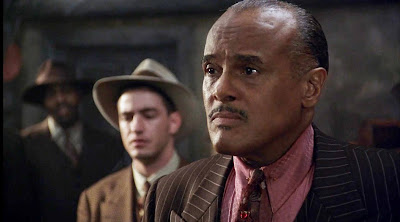 Harry Belafonte in Kansas City (1996)
The element of the unexpected plays a big part in why legendary humanitarian and charismatic nice guy Harry Belafonte is so unsettling as a brutal mob boss in Robert Altman’s 1930s crime noir. As the slick gangster kingpin Seldom Seen, Belafonte (who wrote most of his dialogue) is so chillingly dignified in his benevolent menace (nothing's scarier than a cool-headed murderer), the film surrounding him can never quite keep up. His superb performance won the New York Film Critics Award.

Doris Day in Love Me or Leave Me (1955)
So indelibly linked to a particular image, at least two Broadway musicals that I know of (Do I Hear a Waltz?, Grease) feature songs that use the name Doris Day as a satiric synonym for wholesome blandness. Well, neither is much in evidence in this welcome departure that finds Doris taking a walk on the darker side of her sunny persona to deliver a gangbusters performance as torch singer Ruth Etting. Day has appeared to good effect in dramatic roles before, but the somewhat unsympathetic nature of her character here is a first. And a favorite. 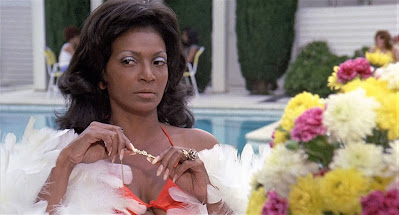 Nichelle Nichols in Truck Turner (1974)
As embodied by Nichelle Nichols, Star Trek’s Lieutenant Commander Uhura was one of the most beautiful, eloquent, and downright classy ladies on TV in the ‘60s. Which is precisely why I had to be picked up off the floor after seeing her performance as Dorinda, the provocatively dressed, homicidally ruthless, astoundingly foul-mouthed whorehouse madam in this entertaining Isaac Hayes action flick. Strong-arming and bitch-slapping her way through the fulfillment of a crime vendetta, Nichols appears to be enjoying herself as she shoots for the stars and boldly goes where her talents have never gone before. 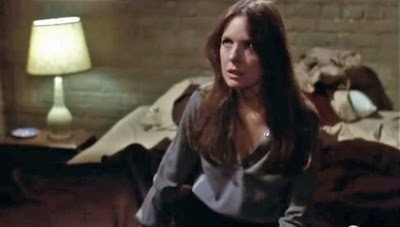 Diane Keaton in Looking for Mr. Goodbar (1977)
The more Keaton’s recent screen output has felt committed to reasserting her career-long image as a loveable kook, the more grateful I am that when faced with an opportunity to take a creative risk so early in her career, she not only seized upon it but soared. Giving what remains hands-down my absolute favorite performance of her career, the forcefulness of Keaton's emotional honesty in this difficult dramatic role hasn’t diminished for me iota since first seeing it some 40-plus years ago. 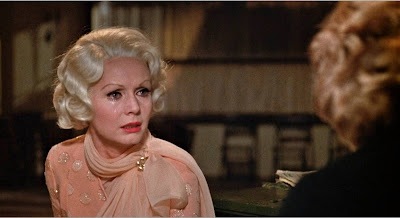 Debbie Reynolds in What's The Matter With Helen? (1971)
This isn’t MGM musical-comedy star Debbie Reynolds’ first serious role. But it does represent her first and only go-round in the Grande Dame Guignol annex of the exploitation horror genre, and she acquits herself with steely aplomb. Playing the purposefully hardened yin to Shelley Winters’ nutty-as-a-fruitcake yang, Reynolds is terrifically game in not needing to make her character come across sympathetically. It’s my favorite of her dramatic performances. 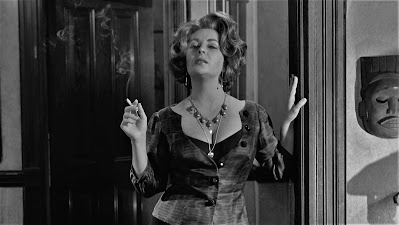 Elizabeth Taylor in Who's Afraid of Virginia Woolf? (1966)
I rarely get to say this, but I was too young to remember the hubbub surrounding celebrated glamour-puss Elizabeth Taylor being cast as the vulgar, boisterous Martha in the film adaptation of Edward Albee’s scorching play. I suspect few doubted she’d have trouble with the vulgar/boisterous part, but at almost twenty years junior to the character as written, Taylor was not exactly a shoo-in casting option.
Especially since her tabloid high-visibility so tended to overshadow her talent.
I saved Elizabeth Taylor’s role in Who’s Afraid of Virginia Woolf? for last in this Top Ten List because hers is the only against-type performance I became aware of in reverse.
When I saw “Woolf” in 1967, I was about 10-years-old and it was my very first Elizabeth Taylor movie. Having no idea of what type she was playing against, I just thought she was really good because she made me cry. 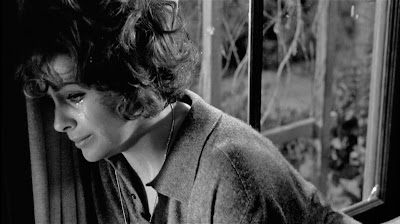 Not-so-fast forward several decades…by which time I’d seen virtually all of Taylor’s films and rewatched “Woolf” more times than I can count. What's happened is that my gradual after-the-fact awareness of how so NOT like Albee's Martha Elizabeth Taylor was when cast in 1965 has given me a greater respect and appreciation for the degree of risk involved and the range displayed in her performance. And what an Oscar-winning triumph of a funny, raucous, and very touching performance it is.
HONORABLE MENTION
Jane Fonda - They Shoot Horses, Don't They? (1969)
Dean Martin - Toys in the Attic (1963)
Patty Duke - Valley of the Dolls (1967)
Candice Bergen - Starting Over (1979)
Anthony Perkins - Psycho (1960)
James Darren - Venus in Furs (1969)
Raquel Welch - Kansas City Bomber (1972)
Michael Keaton - Batman (1989)
Glenn Close - Fatal Attraction (1987)
Jean Simmons - Angel Face ((1952)
Readers:
Good or Bad, what's your favorite playing against type movie performance?

Email ThisBlogThis!Share to TwitterShare to FacebookShare to Pinterest
Labels: Essay